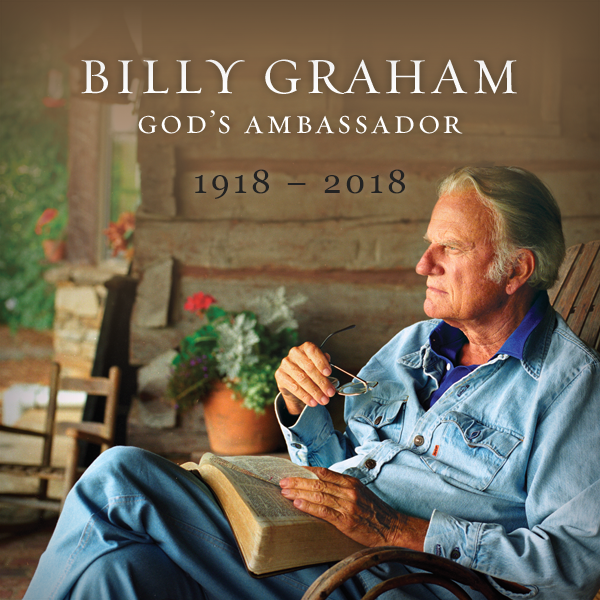 God called BGEA founder Billy Graham home today at age 99. Mr. Graham once said, “When we reach the end of our earthly journey, we will have just begun.” Now, he is in the presence of the Lord. Your thoughts and prayers are appreciated. Please continue to follow updates here and at https://memorial.billygraham.org/

MAY HIS SOUL REST IN THE LORD. 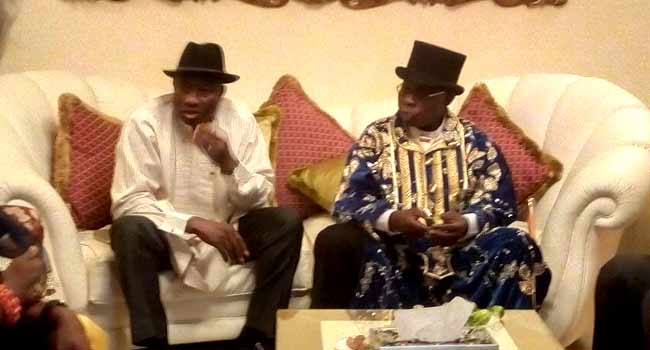 THE GENERAL DOESN’T HAVE TO GO THAT DIRECTION AS NOT EVEN GOD ALMIGHTY WILL FORGIVE YOU FOR TAKING YOUR LIFE, AND WHICH DOES NOT BELONG TO YOU, BUT YOUR CREATOR

MEANWHILE, I AM NOT TOO SURE IF GOD ALMIGHTY WILL BE HAPPY FOR WASTING HIS CREATIVE EFFORT ON YOU…

THE BEST / SENSIBLE / PROBABBLE  SOLUTION: LEAVE NIGERIA ALONE TO THE “NOW” GENERATION. THE FACT IS GENERAL, AFTER MORE THAN 40 YEARS, PERHAPS > 50 YEARS, AFTER ALL, YOU EVEN FOUGHT DURING THE BIAFRAN WAR, NIGERIA STILL ROTS THIS MUCH. HANDS OFF SIR. YOU ARE NOT THE SOLUTION TO THE NIGERIA MOST NIGERIANS HAVE TASTED THE LIKE ABROAD. YOU HAVE NO SOLUTION TO NIGERIA PROBLEMS. YOU SIMPLY CANNOT FASHION OUT AND BE A MEMBER OF THE PROJECT MANAGEMENT THAT CAN TAKE NIGERIA TO THE NEXT LEVEL.

SIR, HAND OFF, AND ENDEAVOUR TO LIVE PEACEFULLY IN YOUR HILLTOP MANSION. POSTERITY WILL BE GRATEFUL TO YOU FOR DOING THE RIGHT THING, PERHAPS AT THE RIGHT TIME.

Goodluck Jonathan is the former PDP President of Nigeria. He was the CEO of Nigeria PLC for Six Years. That period as still being exposed, and continuously non-stop as unarguably the MOST CORRUPTION ENCRUSTED GOVERNMENT in the history of Nigeria, and possibly might even find a place in the Guinness Book of World Records. The expose’ is ceaselessly being brought to light every single day. No country on the face of the planet has been able to match the daily reports of the level of corruption that Jonathan Goodluck government has now famously known to be. The fact is in some other decent climes of the world, Goodluck Jonathan would have been tried and perhaps been history by now. His administration looted, embezzled, stole and mismanaged the vast amount of petro-dollar the country would have made use to develop the country.

If there was a government that lacked vision, Goodluck Jonathan’s was an epitome’ of one. There was absolutely nothing good that came out of his period. The last time I checked, every indices of infrastructures went into recession.

On his left, in the above picture, and that is, on the right is another PDP President of the same PLC, Olusegun Aremu Obasanjo. He ruled Nigeria for 2 Terms of Eight Years. He unsuccessfully engineered elongating his tenure further, and which would have earned him the abominated Third Term. Meanwhile, He was a military Head of State after the assassination of the late General Murtala Muhammed about 42 years ago. 1976 precisely. He can be said to have been in the management of Nigeria PLC in one way or the other for almost 50 years. He engineered the election of the past three civilian presidents, not excluding the current one. As a matter of fact, he played a significant role in the termination of Goodluck Jonathan presidency.

The awful state of Nigeria as at today results from the gross mismanagement they both have been an integral part of. Now, and for whatever reason, ex President Obasanjo has fallen out of  political romance with the current president, and at the moment is forming a so called Force to attempt wrestling power off the present government just a little short of three years since election.

How anyone with correctly and properly seated brain and in his  / her right sense / frame of mind thinks a nasty mismanagement of Nigeria PLC, hinged on Stealing, Embezzlement, Mismanagement and Looting over a period of 16 years, and with a government that has never managed at the Federal Level will right ALL the wrongs of PDP in just 3 years is beyond imagination as well as understanding.

Now, they are ganging up, and the powerful locusts are teaming together again, with a view to dislodge the man, whose only offence of that of incorruptibility as well as fighting corruption with all available tools at his disposal! If indeed as the Bible says about the ‘just’ that God Almighty is, every aspect of the ganging up will come to futility in Jesus Name.

The question is what exactly have these two spent leaders whose best offerings have resulted in plunging Nigeria even deeper into a state of abyss has left to offer apart from an infliction of further damage on every fabric that constitute Nigeria Nation!

Let a new brigade, or a new breed of politicians rise up now, if indeed a new dispensation is needed. Nigeria does not in the least need these spent horses as they have nothing good to offer any longer.

“I feel ashamed, because I was not present to answer the question, so therefore I announce my immediate resignation”…

STILL WONDERING WHY BRITISH ESTABLISH WORKS / WHY I LOVE THAT CIVILISED CLIME THAT MUCH ?

In Memoriam:
General Murtala Ramat Muhammed, Nigeria’s Most Popular Leader Who Ruled With An Iron Fist

Friday the 13th of February is a day before Valentine’s Day. So also in the year was 1976, lovers across the world were perfecting plans on how to surprise their mates. Some were considering yellow roses while others settled for a day lapping up the tropical sun on Bar Beach. The morning started out like any other.
Lagosians were getting ready for the daily hustle and in no time, traffic started building up. The Lagos deity was awake and the nation’s capital responded to the crows of the cock.
Ever dutiful, the 37-year-old Nigerian Head of State summoned his driver, orderly and aide-de-camp. It was time for work.
Without the slightest hint of anything sinister waiting for them despite many labelling a 13th February an evil omen, Nigeria’s 4th Head of State and the unwavering commander of the Federal Military Government (FMG) hopped into his official car, a black Mercedes Benz limousine. The driver “shanasenjin-ed” (started the engine), proceeded along their normal George Street route. The unassuming group headed for the center of power of the black world’s most populous nation -Dodan Barracks.
Ever since the assassination of Murtala, Nigerian leaders took their personal security extremely serious. While president, Goodluck Jonathan used an armoured Mercedes-Benz E-Guard 600.
Meanwhile, all over Lagos, humanity poured out onto the streets and the traffic slowly gained momentum. In little time, the Head of State was caught in the Friday traffic. A simple leader with populist ideas, he had no speeding convoys, refused heavily-armed security details and preferred to stay in the traffic with his ‘Fellow Nigerians’ until it eased. They were all calm while some other drivers kept glancing at their much-loved and admired leader.
Some shouted out at him with joy and excitement while some others waved like their limbs would fly off the torso. Like a Hugo Chavez, Murtala felt a deep connection with the people and he must have been surveying the area full of his loyal and smiling compatriots, many peering at him through their cars when all of a sudden…
BIRTH AND EARLY DAYS
Born on a Tuesday, the 8th of November, 1938 in the Kurawa Quarters of Kano State to Risqua Muhammed and Uwani Ramatu, he had 7 siblings (one girl and seven boys) and he was the second child. The Alkalin Kano and Chief Kadi of the State, (Chief Judge) was his grandfather (same with his great-grandfather, Salihu Dattuwa) and he would also later get infused in Quranic education.
A Hausa by tribe, he was initially referred to as Murtala Kurawa after their quarters but later took up the name we all know him by today. Murtala’s father was schooled and literate. He was trained as a veterinary inspector and served the Kano State Government in the Hides and Skin Department but later on left to start his own cattle-rearing enterprise.

EDUCATION AND SCHOOLING
-Cikin Gida Primary School -Gidan Makama Primary School
-Barewa College, Zaria (formerly Government College) – On the 26th January, 1952, he was admitted as student number 941 as the school itself was founded in 1909.
He was one of the ten students from Kano and finished in 1957. One of his classmates was the late General Mohammed Shuwa shot dead at his home by gunmen in Maiduguri in November 2012. Shuwa was one of the prominent figures during the Nigerian Civil War and later a leading figure in Murtala’s government. Gowon also attended the same college.
-Regular Officers Special Training School , ROSTS (Teshie, Ghana), now Ghana Military Academy where he was taught as a 2nd Lieutenant infantry tactics and military laws by the late Odumegwu Ojukwu, a man of uncommon brilliance, in 1958.
Another student of Ojukwu in Ghana was Benjamin Adekunle also known as The Black Scorpion. Both Murtala and Adekunle would later face their teacher in a bloody duel in the Nigerian Civil War. Obasanjo and Gowon also attended ROSTS. Cadets from all over West Africa then attended ROSTS for six months military training before proceeding to Sandhurst for course completion and commissioning.